We lost another of our old friends on Saturday, January 29, 2022–Arthur “Tripp” Dobson III.  Tripp fell to cancer, like most of the other friends of our shop that we have lost over the past couple of years, including Roy Palm (who was a mentor to Tripp like he was to me), Britt White, and Ron Rouse.  All of these guys were great souls as well as great fishermen, with great intelligence and wit, and old school roots who remind us still of a time more innocent and fun.  I’m sure, right now, all these guys are sitting around a picnic table in a back yard in the sky with a pond and trout stream around it like Roy’s old place–telling stories, smoking cigars, and having a glass of the old brown water.

Tripp was a room mate of mine some 20 years ago for 4-5 years, back when Glenn Melus and Ed Deison also lived with me here in Carbondale.  Tripp would bring his beloved old dog Maggie with us when we went pheasant and duck hunting between Silt and Debeque.  She still loved it, in spite of her arthritis and old gray whiskers.  I saw Tripp make some of the most awesome shots at pheasants back then that I have ever seen anyone make.  “They sure die purdy” he would say.  Lots of memories of him in the back yard smoking meats in the smoker.  He was always there when we had the annual tradition of floating the Fork on Christmas Day.

Tripp had an awesome collection of “Trippisms” that he would whip out spontaneously at just the right time to fit the situation.  When the fishing was slow, he’d turn to you and say “Maybe yer minna is dead”.  Or you’d find yourself standing next him fishing or out at night–or any one of a million scenarios, and he would say “This is stewpid!”.  And when it was time when you had to go do something, “Awwllriiight….”  Your flies would get tangled up and he’s rowing you, and it was “Yer rig is all fuckered up…” which you also got when you partied too hard the night before–or got into bar fights with crazy Aussies and Kiwis in Aspen.  Or all the times people would talk about the fishing on the Pan being tough:  “You know what you should have done, you should have fished the Roaring Fork…”

We all had a guides’ day off one day in September back then, and like a lot of those Indian summer days without a cloud or a hatch on the Colorado between Glenwood and Dino, the fishing on our float that day had been slow.  We were about a 12 pack in, and with Ed at the oars pushing through the frog water above Dino, I was still chucking a big bunny conehead streamer out of a desire to not get bored as much as anything.  I threw into the bank and tried to retrieve as Ed pushed, but my fly sank directly towards the bottom–which turned out to be the perfect presentation to one of the biggest shocks of my fishing life.

Something picked up my fly and charged back upstream with it, taking all the line at my feet and starting to peel it off my reel.  I turned around and yelled at Ed “Help me out here–I’ve got a huge brown on there!”.   Well, Ed turned the boat around alright, since Tripp evidently had a plan… Tripp was whispering at him and tapping his shoulder and directing him towards the middle of the river and underneath a large downspout from a pipe that used to go over that section of river.  Facing back upriver and fighting the fish, I had no idea what was coming—which was the most massive gusher of freezing water pissing hard straight down onto my head as Ed held me there and he and Tripp howled at my expense.

We finally drifted free of the gusher, and as the fish got closer, Ed said “You’ve got one of the carp I saw there earlier this year.” “Bullshit!” I said– no one we knew had never caught a carp that far up the Colorado (and still hasn’t to my knowledge), but it turned out to be true as the fish came into view.  I pleaded for Tripp and Ed to help me net the fish, but they were still too busy busting a gut laughing their asses off, so I then proceeded to try to net the big carp myself.  In the process, I broke Ed’s brand new 8 weight Scott fly rod, screaming out the F-bomb.  Ed then said, “You’ve still got him on there!”, and somehow netted the fish–broken rod and all.

Thank you Tripp, for making this the fish of my lifetime: 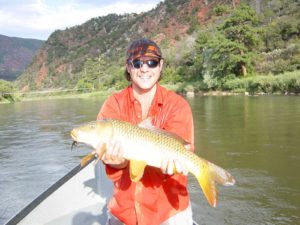 Tripp was a hell of a pike fisherman.  I was on Harvey Gap with him one day, and it was my turn in the bow.  I stood up there for 45 minutes while he rowed me around the bank while I looked in futility into the shallows for pike suspended.  He finally pulled the boat off the bank into the deeper water, grabbed his rod with a sinking line and cast it in once off the shelf.  He let it sink for 15-20 seconds, took a couple strips, and hooked up with the pike pictured at the top of the page that’s shoved into my face.  “That’s the way you catch a pike!” he yelled out.  Here’s a picture of another nice pike he caught with Mikey T: 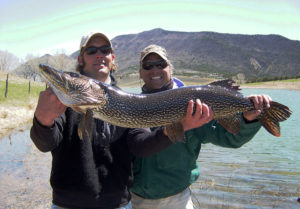 Tripp gave his down to earth viewpoint and his time freely.  He always donated his time to charity fishing events, especially those that were held up at Kevin Costner’s property above Aspen for kids and vets.  Tripp was friends with Kevin and Kevin’s caretaker who was also a Nebraska cornhusker.  Tripp was completely real in all that he said and did.  Thank you so much for being you Tripp, and thank you for all the memories.  May you rest in peace.

By manager / No Comments